First of all, what is Availability Sets?
In SCVMM 2012 SP1, Microsoft added Availability Sets. Failover Cluster Manager users are probably familiar with AntiAffinityClassNames, and Availability Sets are a very similar concept. This allow the user to specify a set of VMs which they would prefer to keep on separate hosts, and the Intelligent Placement engine works hard to make sure that all our features respect that preference.

Attempting to place multiple VMs with the same Availability Set onto a single host will generate a placement warning, meaning that the host will be prioritized last in the placement dialog

You can manually create A 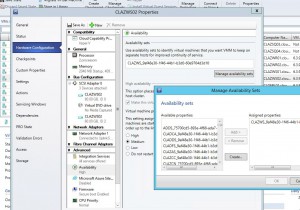 vailability Sets through SCVMM by selecting Properties on a VM.
Just click Create to make a new Name and assign it to the VM’s you want to keep on separate Hosts. When a Availability Set is not assigned to a VM any longer, the Availability Set will be deleted automatically, thus cleaning up the list for you.

that automatically. Depending on your naming convention for your Virtual Servers, this might or might not be possible for you.
In our case we have a strict naming policy to name servers with:
PREFIX FUNCTION NUMBER as seen in this picture:

Which makes it very easy for me to define that all servers called CLAZSQ* are similar and should be kept on different servers.

But, if all servers were called SRV0001-SRV9999 it would not be possible to utilize the ServerName for setting Availability Set names, and you would have to query the CMDB for info first.

I wrote this quick and short Powershell script to automatically assign a Availability Set to all VM’s. It will remove Numbers from the VM Name, and use the VMName + UserID (Tenant Subscription id) as the Availability Set Name. Clean, simple and easy, just schedule it to run regularly, or even make a SMA Job to trigger when a VM is created through AzurePack.

And then trigger an Host Cluster Optimization of all Clusters in the Environment if you don’t want to wait for the normal one.