I’ve recently invested in a alarm for my house, after quite a lot of research i finally went for Siemens SPC 5320 for all the cool features, it feels like one of the most modern alarms out there. As it can be controlled from the web, smartphone applications for  iphone and android, usb, ethernet (ip) etc etc.

It’s more of a high-risk enterprise alarm, than a residence alarm as it got Grade 3 (and can have up to Grade 5) classification, making it usable for Banks and other high-risk objects, or to protect my geek lair (man-cave), son’s hideout, my wife’s gym, bedroom, the kitchen and other areas, also known as our home.

Another reason I bought that specific alarm is that a Swedish company called Lundix has recently released a Gateway that can talk with the Alarm and connect it to other systems. Or just execute things when specific triggers happen in the alarm. Like send a mail (to specific persons) when the Alarm goes off, or maybe notice the parents when a specific person arms or unarms the alarm, ie leaves and gets home from school.
It’s even possible to get noticed if that’s done outside the normal hours. For example if personnel in the store is late unarming the alarm, or arms it too early… 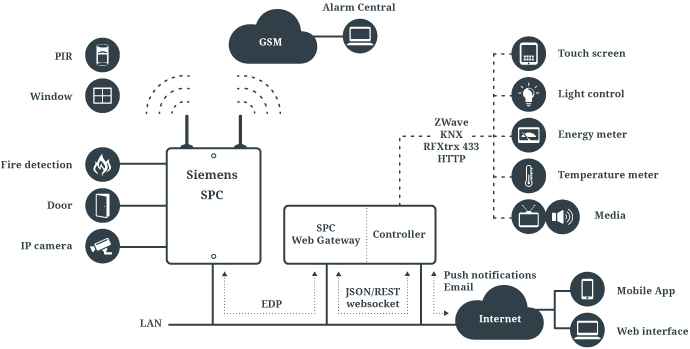 Summary: The SPC Web Gateway is providing a generic open web interface to Siemens SPC panels. The interface will simplify SPC integration with third party applications and products such as Home and Building Automation Systems, Smartphone Apps and Web applications. The Web API is using HTTP and REST principles (RESTful) for requests to SPC panel and WebSocket to reporting events from the SPC panel

And as the Gateway talks REST and WebSocket, it makes it possible to use Powershell! Looks how easy, cool, and smoth it is;

Next step is to add it to the new-user-creation workflow. So when a new user is created in AD, it will also create a user in the Alarm, generate a random PIN code and include that information in the Welcome Mail and SMS sent to new users.

Or possibly initiate a company wide erase of confidential data, in case of a Alarm. Anyone who can see that going wrong and causing problems? Especially as I saw some figures stating that more than 90% of all Alarms are false due to user error or indicator faults.

Well, I’ve just started playing around with it and if there is interest I’ll keep you posted on my progress and different automation scenarios i setup.