This morning I noticed that one of the Hyper-V Hosts at a customer were logging this error regularly in the system Eventlog;

I can so far unfortunately not find anything that’s logging why Windows is reconfiguring all MSI Packages on the server every 30 minutes.

We always enable the Reliability History on all servers whi

ch can be handy at times to see when a problem begun happening.
Check this Out!

As the Reliability History tool is disabled by default, I’ll make another blogpost showing how you can enable this feature for all your servers. 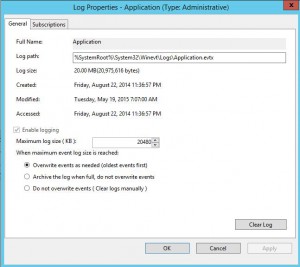 So I don’t think I’ll get any more details that way, and it does look like this problem has gone on for quite some time.

I’ll just reinstall the Hyper-V Host as it’s done in a few minutes compared to spending hours trying to fix the problem.
AND… I’ll create a Group Policy that will increase the Eventlog Size to x10 the default. So the next time something like this happens, I’ll have information to dig deeper.

After doing some more digging, it seems according to this KB Article (KB974524 : Event log message indicates that the Windows Installer reconfigured all installed applications) that this problem can happen if one of the following is true:

As the problem is not happening every 90-120 minute which would be true if it was GPO Triggered, I would say it’s an application that uses the Win32_Product class. And after doing some digging, it turns out it’s a known problem with VMM which will be fixed in UR7. Or hopefully earlier with a hotfix.

Wow, I got a hotfix for the issue within 15 minutes after contacting the VMM Team.
I’ve just installed it in our test environment and will later install it in the customers production environment.

Unfortunately I don’t have a KB or Hotfix ID for this, but if you contact Premier Support I think you can mention that you need a hotfix for Engine.Adhc.Operations.dll which gives support for RegKey: UpdateDHCPExtension
That info should make them able to find the correct hotfix.